A visit to Pavia, Italy and the 2009 soundSCAPE New Music Festival provided the venue for this piece’s impetus. Pavia’s history supplied the possibility and the only three remaining medieval towers in the city ignited the inspiration. Located in the center of the Università degli Studi di Pavia, each tower possesses a distinctive design and the three short pieces in “Tre Torri” seek to reflect each of these characters. The first movement explores the graceful and stately simplicity of the tallest tower. The second movement imitates the smaller clock tower and all of the potential wonderful sounds that emanate from its workings. The final movement represents the least stable tower of the group, the braced tower. This movement seeks to stabilize itself but is often distracted and unsettled. 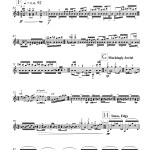